Well, maybe on the 8th (see last blog post) I could see the future! Lo and behold we have panic buying of petrol! And a strike hasn't been declared yet... I went to the service station the other day in my 8 or 9 day cycle to fill up as usual, and was sitting in the queue for a while wondering how many of the people ahead actually needed the fuel!. I did, my car was bleeping at me as it was hungry!

I don't really want to get personal, but despite the lack of common sense shown by the lady who decided to decant petrol in her kitchen with the hob on, the government minister who suggested filling up jerry cans to stock up on petrol really does need to take some of the responsibility, as the lady in question wouldn't have felt the need to muck around with cans of petrol in her kitchen if the nitwits (and that is putting it mildly!) in Government hadn't opened their gobs and panicked the general sheep ...sorry general public....

And pastie tax...well if a pastie has just come out of the oven, do I have to wait until it has cooled down before I buy it? I heard one suggestion that bakeries should install microwaves for customers to heat their own pasties up... It turns out the last time the Prime Minister ate a pastie was 5 years ago, at a now defunct shop in Leeds railway station, he probably can't remember the last time he had to get his own food never mind go to a bakery!

Posted by Cashandcarrots at 20:59 No comments:

The petrol price is getting ridiculous! I remember when the fuel protestors were getting irate about petrol and diesel being 80p a litre back in 2000. Back then I was tipped off by a friend in the local garage on the Sunday, so filled my car right up - by Monday everyone was panic buying and there were queues everywhere. People just went silly - supermarkets cleared of bread and other staples... Thinking laterally, I went in a health food shop, got some yeast and we made bread that evening! Later that week the black propaganda from the Government got going, hospitals supposedly running out of fuel, ambulances not able to get fuel etc - shouldn't have been a problem as the military have an extensive fuel system designed during the Cold War to keep fuel flowing around the country in the event of a war. Besides the Government can use emergency powers etc. It was just to break the strike by turning the public against the blockade.
We'll find out in 20 years time when they release the papers what really was going on, what decisions were taken and so on.

Back to the present, I drive around at 60 mph most of the time now, and average 41mpg. How you drive is important too, no revving or fast acceleration, stop start in towns is bad as well - I use the motorway which is - miles wise just slightly longer than the A roads but get 1-2mpg better on the fuel and a much quicker journey time. However, I am filling up every week with about £66 worth of fuel just to get the kids to school and to work, although any trips out with work get mileage allowance.
The high fuel prices don't seem to stop some people though, there's always drivers zooming along in cars which are probably consuming a whole lot more than mine is. And they sit right up your backside if you happen to be in their way (tip - gradually slow down or raise your left hand (if in the UK) and motion backwards repeatedly, many times they get the message and back off. I have even heard of one driver stopping altogether and having words though I wouldn't recommend that myself!)

I have to consider though whether the amount I am using in petrol is sustainable, both from a cost point of view and I do feel a little guilty at burning all the carbon. However, I have no realistic alternative at present.
Posted by Cashandcarrots at 21:43 No comments:

It is purple sprouting broccoli time! And we've got some creamy coloured sprouting brocolli which looks like those mini fractal cauliflowers you sometimes see in greengrocers - it does have a name but I can't remember what it is.... 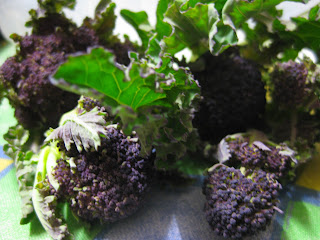 Posted by Cashandcarrots at 21:25 No comments: