In the not so bleak midwinter!

'Tis the season to eat holly.... well not quite! But the local blackbirds have been coming to the holly bush in the garden and munching berries, shame I can't persuade the waxwing that turned up at the Askham Bar Tesco in York to do so! (There was a waxwing very briefly in a tree at the end of our street in early 2017!)

We're putting plenty of food out for the birds, the gangs of noisy and squabbling house sparrows in the garden and the allotment, friendly robins, great tits, blue tits in both and today there was a Mistle Thrush pottering around the allotment and trying out new tunes. Have you noticed that thrushes and robins try out melodies very quietly at this time of year? There was a song thrush up near the University in Leeds doing the same the other day! The birds around the allotments soon made themselves scarce today as two Red Kites flew over low this lunchtime. One often checks me out when I am at the allotment, they have spread out so much since the re-introduction programme from Harewood House a few years ago, and indeed are actually historically quite urban birds, indeed a good place to see them is around Seacroft in east Leeds as they swoop around the flats there, and I've once seen a group of six of them (yes, six - people 30 years ago would have thought me crazy if I had said that then!) circling low around the A64/outer Ring Road roundabout one day as I was coming home from work. A trip to Leeds and back will usually result in seeing three or four.

The local starling flock has increased over the years, now about one hundred strong, good to see them making a comeback, and there's a noisy group of jackdaws that come down into the allotments too.

Anyway, much as I could fill this blog with bird tales, what about the growing? 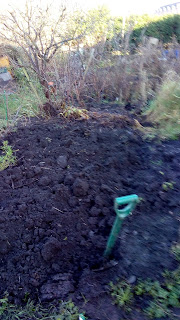 Well the main job at this time of year is digging and tidying. This was the potato patch last season and now all that is to do is to go back over and collect any stray potatoes and allow the frost to break up the soil and the robin to have dinner!

At the back of the shot is the damson tree and we have been overrun with damsons this year, enough to make over twenty jars of jam! (approx three hundred damsons went into eight or nine jars of jam!) and there's still more in the freezer.

I've moved one of the rhubarb roots (or are they rhizomes?) over to alongside the asparagus in the patch behind the damson as where it was it was getting overshadowed by the comfrey very quickly. Seems to have established and is making the first shoot.

The winter onions and garlic are poking through now, these are going where the beans and peas were this year though in most of the patch I let the remains of the pea and bean stalks die off into the soil as is it a good way of fixing nitrogen through these roots. The remains of the nasturtiums that also wind themselves around this part of the plot also get left to rot down as they give ground cover to inhibit weeds. 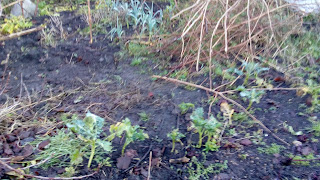 Looking a little haphazard this is the winter vegetable area. There's some calabrese in the foreground, which will be ready in two or three weeks, and a couple of swede. This is the first time for many years we have been able to grow any swede, I thought the soil was unsuitable but maybe this variety is happy with the conditions. Further back we have some leeks for February/March and at the rear is a row of parsnips that have been going well for a couple of months now, some of which were consumed at Christmas dinner. Generally though we slice them up like crisps and deep fry them to have instead of potato chips or as an accompaniment to a roast dinner, they are in my opinion better crispier than in wedges. 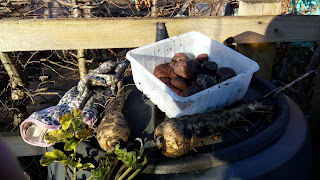 Today's pickings, stray potatoes from digging over the patch and two parsnips for having with leftover turkey tomorrow!
Posted by Michelle at 17:52 No comments: