After last week's record - but unnatural - temperatures, this weekend has seen a return to what should be the case for this time of year, wet and windy and cooler.

But there are signs of Spring in the allotment. The temptation if there is a mild spell of weather and it starts to seem Spring-like is to get planting - I have seen a row of potatoes sown into a nearby allotment for instance - but in my experience it is better to wait until at least the middle of March before planting anything. The first things to go in are early potatoes - which will be under the ground for most late frosts (though I have on many occasions had to hurriedly earth up shoots in early May) and parsnip seed which will germinate in its own good time when the weather is right.

Indoors I have planted peas, peppers, gherkins and my wife has planted salad leaves for cut and come again harvesting indoors in window boxes. Have started chitting Sarpo Mira, Duke of York and Desiree potatoes. Next will need to be some brassicas, and regular sowings of peas so that they are big enough when the weather improves to survive the house sparrow parties that we have in the yard and in the allotment! 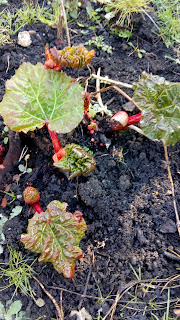 I have I hope, been able to thoroughly root out a dead nettle that was invasive underneath the rhubarb.

Other jobs undertaken in the allotment have been trimming the top of the hazelnut tree - done without managing to remove too many catkins - I wanted to get this done before the bird nesting season - whilst I like the tree and it does produce some hazelnuts, it is very vigorous and does need to be kept in check height wise. Also, making sure the hedges are a suitable height - again before bird nesting time. 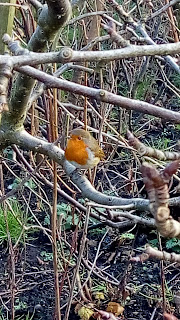 I have dug over all the areas that can be done right now just leaving those bits where there are still winter vegetables in.

The robin (s) - I think there are now a pair of them - regard my activity as just solely on their behalf and will come quite close as they search for tasty morsels that I have exposed whilst digging. I think though that the male robin regards the allotment as his and flaps his wings at me on occasions and sings at me rather than to me as well! 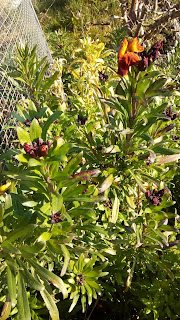 The cornflowers have overwintered and, I hope, self seeded a bit, and are now flowering. We have also some asters and marigolds and nasturtiums that we have left to self seed to create opportunities for pollinators and a bit of distraction for such as the blackfly. We also have some lavender which I think might be reaching the end of its natural life, but when in flower is a magnet for bees and - as it goes dark - moths.

We left the sunflowers to die off and so that the seeds would be available to birds over winter. The remaining stalks and flower heads are now getting composted.

We have done well this year for overwintered vegetables. The carrots and parsnips are still going at time of writing, although the beetroot have now finished, There is still a bit of spinach and the inevitable stray potatoes when digging over last year's patch.
In store are still some onions which have kept pretty well. The stored apples are pretty much finished now, but it has been a very long apple season! And of course the jam and chutney and gherkins we have in jars!
Posted by Michelle at 18:10 No comments: