Found this interesting article about a new BBC programme

I have done quite a bit of reading recently about the late Roman period. I am quite fascinated about the period from 400AD, where the frequent invasions and uprisings, decline of the power of Roman emperors, usurpers to the Roman throne etc eventually led to the Rescript of Honorius, the response of the emperor to the Briton's appeal for help to protect them from invading hordes.

The end actually came more gradually. As late as around 450AD (I hate it when people try to use C.E so that they don't have to acknowledge religion!) St. Albans still had some semblance of Roman civilisation and community.

However, as people left the cities and made more of a subsistence living for themselves in the countryside, money wasn't needed any more as barter was much more useful. A similar thing happened when Argentina went bankrupt a few years ago, money no longer had any meaning and so people resorted to their own barter economy.

The same thing will probably happen in Greece, irrespective of whether it leaves the Euro or not. But if it leaves the Euro, without any form of backing to the "Promise to Pay" form of money - which of course has to be underwritten by the reserves of the Government or central Bank - then there is no basis for the currency. They'll get through it eventually - Argentina is now sufficiently back to normal as to throw its weight around about the Falklands!

There are some interesting parallels in the article, rise of radical movements, migration, greater divide between rich and poor etc.

I once saw a very interesting programme about the eruption of a volcano in about 510AD which caused a global cooling for 3 years or so - mass famine, failure of harvest, no summer - and we struggled nowadays with a small Icelandic volcano! (which I saw the year before it was famous!). This I think killed off - with a handful of exceptions -  the remaining western civilisations and then end of the Roman world was truly complete.....

Posted by Cashandcarrots at 21:54 No comments:

One of my many hobbies is building up the model railway, especially the scenery. I have always been into model railways - my train set when I was a child was on an 8ft * 5ft board on a spare bed in my bedroom and myself and my Dad had further boards on trestles going round the room!

Anyway, model railway construction materials are often really quite expensive, as is the rolling stock. Luckily all  my stock from when I was a child was still stored underneath my old bed. One of my daughters said one day that we could get the model railway going again - I think she had been playing with my Dad's n gauge layout - and had worked out that if we cleared the spare bed, and got a board , we could have them running again.
So, I set to and cleaned and oiled the engines - although one of them ran straightaway despite being stored for about 15-20 years! I had to get some track - especially points as they were rusting, but other than that we had a basic layout without too much effort.

Now, my daughter is very into making models - she has a friend who is into Airfix and war gaming and she has made tanks and painted soldiers and we have had battles on the living room floor! My father-in-law let her have his Linka-Brick set.

Now, Linka-powder is not available any more, but there was still some left for starters. The idea is that you mix up the powder, pour into moulds - which are brickwork, bridge arches, roof tiles etc and leave to set.
Once dry, pop them out and then glue together into buildings or whatever you wish to construct.

The modern replacement for Linka-powder is Heraculite-3, available at craft shops and online. Pretty cheap as well, and it goes a long way. My daughter made the church below 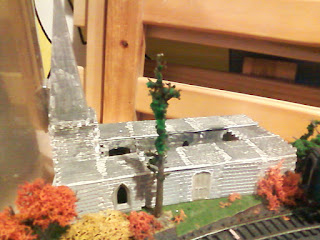 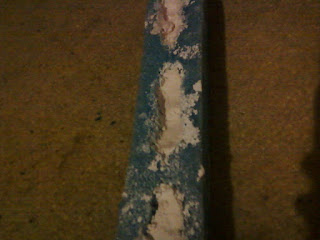 We popped the moulds out 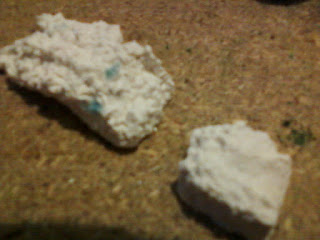 We then painted them 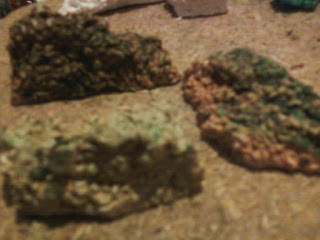 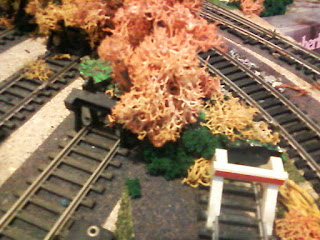 Ebay is also a good source for second-hand rolling stock and other people's leftover scenery, track etc, although competition is pretty stiff for it. Still, I got a "corridor" coach for £10, which is about half price compared to new.

However, I like the build-your-own or "scratchbuilt" as it is known, and if I was starting from cold the idea of building all my own rolling stock would be great - but with a lot of stock already I have only built a few fruit vans and mineral wagons from kits as I needed some more of these to produce typical trains for the period I have set the layout as - which is early 70's.
Posted by Cashandcarrots at 21:43 No comments:

Now I know that many people think the thrush family of birds are gardener's friends. Well, yes they can be, munching through slugs, snails and other grubs that can cause problems in the allotment. However, today my wife was rather distressed to find that all the newly planted sweetcorn, and their peat pots were spread all over the place!
I went up first thing this morning to water them, all was well, but by late morning something had been along and pulled them up. Now, I have had problems with blackbirds pulling up the tails of onion sets before now - they are easy to put   back in and generally survive. But it looks like we have lost about 3/4 of the large sweetcorn my wife has spent a lot of time planting.
She wants to know whether she can wring the bird's neck! However I told her that such as song thrushes are on the "at risk" list of birds (their numbers have declined dramatically over the past few years, probably due to pesticides). She said that if she gets hold of it - it will be at risk!

We've not had bird damage before - even the woodpigeons don't seem to go for our allotment - I think it is because of the hedges - they seem to prefer the more open plots nearby where they can see their predators coming!

At least the mini sweetcorn were untouched, but they are a bit further on in growing and look less like the ends of worms.....
Posted by Cashandcarrots at 21:03 No comments:

Sunny day at the allotment

Although I am still feeling the nettle stings, today was a productive day at the allotment.

Dug over part of the bottom end where the carrots were last year, and two seem to have survived the winter underground! They looked ok so that prompted me to pull the small number that still had leaves on which I thought would have been all woody by now. The guinea pigs ate the leaves, and we had a bit of fresh carrot in with the rice at lunchtime!

Picked a few very small leeks, again left overs from the winter, they went in the rice as well. Picked yet more brocolli, which didn't go in with the rice, I cooked this separately as I really dislike the stuff! The rest of the family eat it though.

As well as picking I did some actual work! Got the rest of the onion sets in, and did a fair bit of clearance work, especially around the blackcurrants and raspberries. We did blitz the area with newspaper and guinea pig bedding to create a mulch to keep the weeds down, but now the grass is growing on top of the newspaper!
It's a long process as it's touch grass and the roots of both the grass and raspberries and indeed the nettles make for a very slow job.

The chair I rescued from an allotment that was getting cleared out by the brewery last year is coming in handy and was a very pleasant place to sit, south facing in the sunshine today, it felt very warm but I think it only got to about 10 deg C on the thermometer, more rain tomorrow apparently

Finally, I picked some rhubarb, the kids eat it raw with sugar or sherbet dips. Peeled and sliced up the rest , sprinkled with sugar and froze ready for jam making later in the year, although I may use some to make a chutney recipe I have in the Preserves and Pickles book I have.

Posted by Cashandcarrots at 21:59 No comments: