It is hot! And dry! The allotment needs watering with a hosepipe every two days and some things in containers every day. 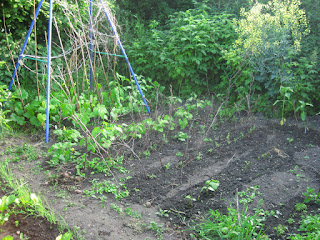 This is the pea and bean, courgette and cucumber patch. For some reason, the past two years haven't been good pea years at all, or it could be the sparrows....

We've had the old swing frame for some time and this year it is black-eye and kidney beans and cucumbers that are being trained up it.

At the back are the supposedly Autumn fruiting raspberries which get going round about now.... 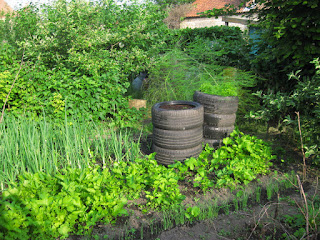 This is the part where this year are onions, leeks, parsnups, carrots (in the tyre stacks again), the asparagus bed, sweetcorn (behind the tyres) and there's some Cosmos flowers just getting going in between the onions, as the onions will come up very soon - in fact we've had some already.

At the back are blackcurrants and raspberries, and the Gala minarette apple tree. Also in the soft fruit area are a grape vine, a minarette damson, rhubarb and comfrey, the latter of which the bees have been really enjoying!

Two more patches are at the top end. The first one as you come in the gate is potatoes this year, Red Duke of York and Desiree as for some reason I couldn't get Sarpo this year, shame as they were very heavy croppers last year. The other patch has now got turnips, radishes, beetroot and broccoli and cabbages in, with some blueberries in tubs, the cornflowers which have now finished and two minarette pear trees.

Elsewhere in the allotment are a Chiver's Delight and Falstaff minarette apple trees, the strawberry bed which now needs replacement, there's a hazelnut tree at the back too as well as blackberries growing in the hedge.

Posted by Cashandcarrots at 17:50 No comments: 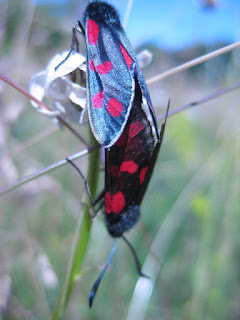 On her cycle ride yesterday my wife found a huge number of 6 Spot Burnet Moths on a wildflower patch just opposite the Yorkshire Wildlife Trust nature reserve at Askham Bog. This was bordered on all sides by roads and cut through with a path but was teeming with moths and bees and some butterflies.

So, this morning I set off with her and one of our daughters to see for myself!

The moths were rather busy and to be honest weren't taking much notice of a digital camera being pointed at them!

The last time I saw these moths - in nowhere near the same numbers was on orchids in the sand dunes near Bamburgh Castle, Northumberland. 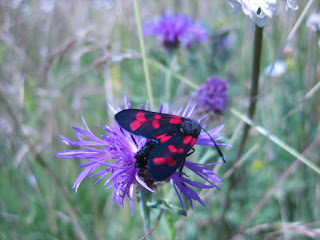 There's been quite an explosion in wildflowers along the verges near where we live this year, probably due to the late Spring and everything happening at once.

There has been some active planting of wildflowers, and the Highways Agency have planted a lot along the A1/M1 link road, the cowslips and ox-eye daisies being particularly appealing this year.

Posted by Cashandcarrots at 18:51 No comments: