On Saturday night I watched a repeat of The Good Life on BBC2 (they were doing some kind of retro evening complete with 70's graphics, Some Mothers Do Ave Em, Dad's Army etc, you don't get sitcoms like that anymore!)
I digress, but my point was that, given that Tom (Richard Briers) was concerned about saving his harvest, why on earth did they a) not wait until the ground had dried out again until harvesting their potatoes, and b) put damp potatoes in sacks!

It was though the case that back then, the whole self sufficiency thing was seen as a bit eccentric really, but now it's mainstream and lots of people was to grow their own food, keep chickens, use renewable energy etc.

Posted by Cashandcarrots at 16:08 No comments: 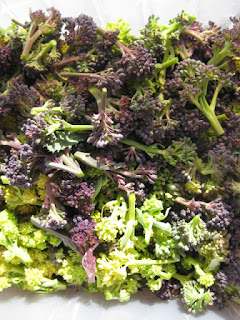 We still have lots of broccoli! This week we had enough for 4 people on 4 days, one of which wasn't me! (I don't like the taste at all but the rest of the family do!) It doesn't show any signs of slowing down, which could get to be a problem as I am running out of space for the potatoes that are going in that patch this year.
I have continues to plant onion sets at the top end, we have not only the ones we have planted this year but also have the "Japanese" type ones that I planted in October.
My wife has also planted parsnips and leeks from seed that we have saved, and also some turnips and beetroot and peas, some of which have germinated, but the weather has been really quite cold of late so I can understand why things are a bit slow.
The tomatoes I am growing in the office need repotting again, they are about 8 or 9 inches tall, the ones in the lean to greenhouse in the garden are a bit small as it's not very warm for them, so they have also gone to the office for a nice warm and cosy weekend on the window ledge!
Posted by Cashandcarrots at 21:54 No comments:

A lot has been said about gold... "we buy any gold dot com" and the like!

That's all very well, but what if you can't afford to splash out on some gold sovereigns, jewellery etc, and don't really want to worry about the cost of insuring all that wealth...

Well, there's value in silver and old copper coins but you need to know what to look for.

The current "big thing" are hammered silver coins. No not just an old sixpence that has been whacked with Stanley Tool's finest! Hammering was the ancient process of minting coins where a blank was put between two dies, one with the front of the coin, usually a portrait of the current emperor or monarch, and the reverse with a design, often a shield or coat of arms or cross with a pellet design and the like.

Then it was whacked with a hammer! (you can have a go at the Jorvik Viking Museum in York). The hammering process was was superseded by machinery (milled coinage) in about 1663. Early milled coinage (George 3 and before) is good to look for as well.

Ebay is a good place to start, but you have to be lucky or be prepared to actively go for the bid, as the demand is high. But sometimes you can be lucky especially if a coin has been listed wrongly.

Spinks catalogues give an idea of what to look for and current values of all coins since Celtic times. Or coin dealers of course, but they will by and large be selling coins for the market value, though again you can be lucky if you know what you are looking for.

The latest Spinks catalogues have pictures in colour which makes like a lot earlier, the black and white ones really didn't do the coins justice and made it hard to work out the detail sometimes.

There is a whole language associated with coin collecting but the Spinks catalogue has good explanations, and there are plenty of in depth books such as on Roman coins available.


Posted by Cashandcarrots at 22:02 No comments: