It's been a while since I last posted, time seems to have gone so quickly. Now it's November and the allotment is going into shutdown mode (cue Windows (tm) chime...)

There are still plenty of parsnips growing, in fact there's two rows, one for eating and one for wine making, that's assuming I can get another demijohn, a sterilised bucket and all the other associated bits and bats before January. There's leeks as well but that's really about it apart from the fractal cauliflower (below) which, now picked, I am told tastes like broccoli. 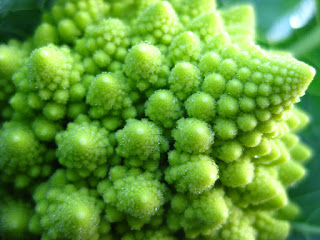 So, much of the work has been digging over the ground ready for next year, though there's some winter broad beans gone in and some winter lettuce and cabbage. I have got some manure (a local farmer drops some off for the allotment holders to share each year), so that's around where the peas and beans will go, and I have mulched around some of the fruit trees. I need to stake out the pears as they are growing a lot now.

Posted by Cashandcarrots at 21:27