Well, I finally got around to making parsnip wine. Or should I say parsnip and sultanas wine as the raisins make the wine taste a lot better, or so I am told!

First step was to dig up the parsnips! And then scrub and scrub them again. But not peel! 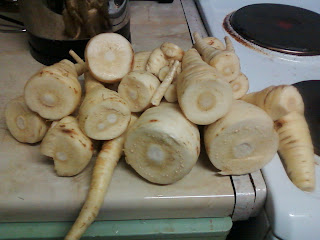 Now to chop them up, not too small 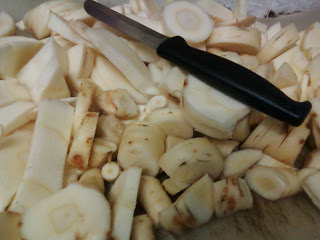 And then boil them for approx 15 minutes with the sugar, you want them softer but not in any way mushy. 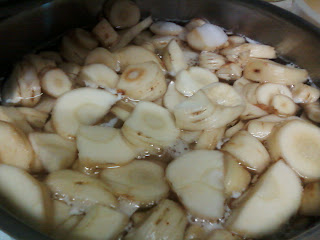 I had to do them in two batches as I didn't have a pan big enough.

So, once cooler I poured the mixture of parsnips, sugar and water into the plastic pail... 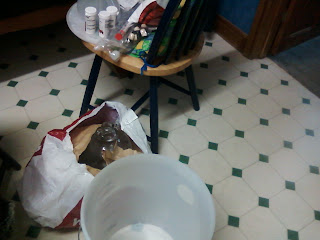 I then added the sultanas and citric acid and the remainder of the water to bring up to 1 Gallon, as well as the Campden tablet

A day later I added the yeast and yeast nutrient and it only too about another 24 hours for there to be visible signs of fermentation.

I now took a reading on the hygrometer, and it was right in the middle of the blue bit that said "start wine". Which was a relief! Though I am still a little confused as this seems to be between 1.070 and 1.090. whereas you are supposed to start between 1.095 and 1.110. However a quick search on Google and a bit of head scratching showed that there's correction factors for temperature, volume of wine etc so it seemed to be ok And it was in the right range on the actual hygrometer!

The plastic pail lived in a corner of the bedroom for 3 days, in hindsight it should have been slightly warmer as the fermentation did slow down a bit.

However, now came the awkward bit. With the help of one of my daughters (money changed hands!) we filtered the mixture into a demijohn using a plastic funnel with a sieve placed inside the funnel. Not an easy thing to do, as the plastic pail is quite heavy and there is a danger of a stray piece of parsnip or sultana falling into the demijohn off the side of the funnel! If that happens, pour the mixture back into the pail and start again.

You will need to scrape the sieve out quite frequently as the holes get clogged up.

So, after about half an hour or so of careful pouring and cleaning out the sieve we managed it, and fitted the airlock. In the top of the airlock (the u-shaped bit) I poured a small bit of water and within a short space of time the gas from the wine pushed the water up to one side. (Once no gas is being given off, fermentation has ended and this water will be level) 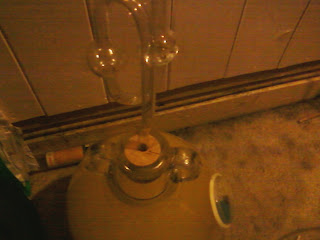 So the wine is now sitting in the demijohn, plopping away every so often as the bubbles come up and there's a small thermometer on the side reading 20.5 deg C which is a bit warmer than in the pail as the demijohn is smaller and can be put a little closer to the radiator. Don't go over 30 deg C or you'll kill the yeast and below about 10 deg C the fermentation would slow down or even stop - there was a noticeable difference between 20 and 15 degrees C in the pail.

So, in 3 months time I should have some wine ready for bottling but it depends on the dryness, I may need to add more sugar and ferment a bit longer as I am not keen on dry wines.

Posted by Cashandcarrots at 22:05