Signs of life in the allotment!

Popped up to the allotment for a bit of a tidy up this afternoon, as - for a change - nice weather coincided with me not having to work or having other plans for a Sunday afternoon!

Anyway, there are signs of things stirring, though with snow forecast this week maybe they ought to un-stir for a bit! 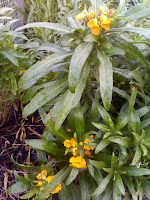 This was a surprise, wallflowers planted last year - biennial of course - but didn't expect them to be flowering so early in the year!

Should be a lovely display if the frost doesn't do for them. 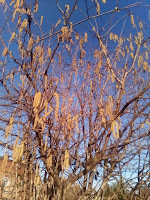 These are the catkins on the hazelnut tree - this tree has had a bit of a traumatic life in that half of it is in the the next door allotment and when this allotment was being made over by the landowner after being vacant for a long while they chopped the tree down on that side just leaving our side to grow. This was rather annoying as for the first time it had produced hazelnuts that summer. Fast forward a few years and hopefully producing catkins for the first time since means that it is going to produce some nuts this year. If we can catch them before they drop into the undergrowth... 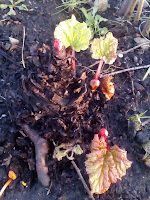 Rhubarb showing itself, Twitter today has had various pictures from gardeners showing rhubarb so maybe it is a coordinated sprouting across the country! Maybe not, just coincidence! But, this rhubarb was originally a offcut of a plant grown within the Rhubarb Triangle in West Yorkshire and so is pretty much the real thing as far as rhubarb growing goes!
I once did a summer job on the farm (Oldroyd's Farm) that has been on TV and in the news for promoting rhubarb and getting the protected place of origin status for Yorkshire rhubarb.
Posted by Cashandcarrots at 19:02