This year here in the UK it is perhaps more important than usual that those of us who grow our own food aim to preserve and store as much as possible. Wherever you lie on the Brexit debate, it is clear that there will be issues in supply chains, I know enough about emergency planning and project management to know that it only takes one overlooked thing to send things off course with problematic consequences. The people in the know - those that haven't been silenced by NDAs (Non-Disclosure Agreements) whether they be in retail, growers, livestock, import or transportation have been warning of issues for a long time and indeed the Government's own risk assessments have rather gloomy, if not highly disruptive, outlooks for Post Brexit UK.

Before I get onto our present allotment harvests, may I recommend "The Fall" podcasts by James Patrick (@j_amesp on Twitter) and Guy Dorrell (@GuyDorellEsq) for tips on how to prepare yourself for any disruptive event - the same advice is applicable to such as weather emergencies that disrupt access and transportation.

This isn't scaremongering. I will actually be glad if nothing happens. But it is better to be prepared and nothing happens than being caught out and wishing you had prepped. 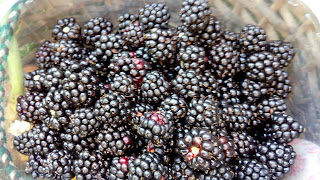 Now, this year has been incredibly good for our allotment blackberries! Why anyone bothers to buy blackberries in a shop I really do not know, especially when commercially grown blackberries will have had goodness knows what chemicals sprayed over them. Even if you don't have your own supply, there are ample bushes out there - the "edgelands" in urban areas are often the places where foraging is most useful. My grandparents used to pick from the railway embankment (obviously not going past the fence separating the railway!) near their flats in inner city Leeds, and I remember going to do the same at a local railway station, as did many others. 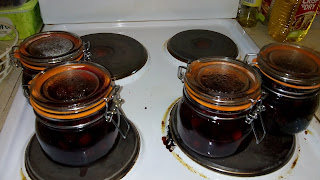 Unfortunately, we are running out of space in the freezer, despite turning a lot of soft fruit into jam already! Four tubs of blackberries have been given to my parents too!

So, I have tried my hand at bottling blackberries in sugar solution today. Hopefully these will store and then can be used on breakfast cereal or in puddings. 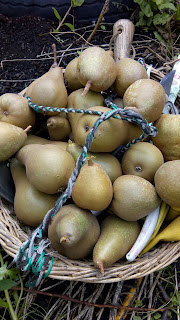 Today was also the day that I started picking pears. Of course, they will need time to ripen in storage, but it was really nice to come home with a basket full of Comice and Conference pears.

We have two "Minarette" style pear trees in the allotment and whilst there aren't quite as many as last year there are certainly enough to keep us going for a month or two!

The three minarette apple trees in the allotment - a Gala, Chiver's Delight and Falstaff, aren't quite ripe yet and indeed the Gala is an incredibly late ripening one with some of the fruits only just ready at the start of December! 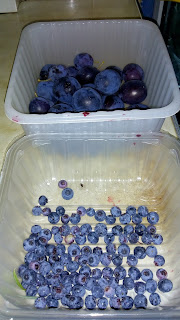 Also picked today were some more damsons and blueberries.

The pot blueberry bushes took about three years to come into full production but these past two or three years have been very heavy cropping. They are in pots as they need an acid soil - they are in ericaceous compost and if possible only get watered with rain water, though this has been difficult to keep to this summer at times.

The damson tree is supposed to be a minarette, but seems to have outgrown itself although we do try and keep it below 6ft tall. We might well prune it quite severely this winter to shape it a bit better.

However, this year it has excelled, in some years a late frost in May will destroy the blossom and reduce the cropping but I think this year there may well be around 150 fruits at least, never had that many before! 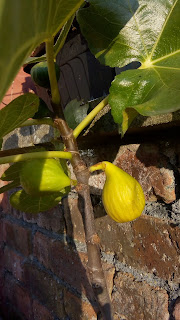 In our back yard (if you are reading this in the US - a yard in the UK, like ours, is usually concrete and often has a wall round it) is a pot fig tree and this year (after about 3 or 4 years maturing) is producing ripe figs - only two so far with two more on the plant but I had one for breakfast the other morning and it was very tasty!

Again, only gets rainwater and with any fig tree, the roots need to be constrained. It is in what probably is the most sunny spot in the yard and the wall behind the tree gets very warm in the sun, in fact the thermometer on the wall measured nearly 50 deg C one day in the recent heat wave! But a warm wall releases heat slowly overnight thus keeping the plant warmer than it would otherwise be.