As I write this, the wind is getting up again as Storm Jorge works its way across the UK. (Who names these things? They would be more impressive named after Norse or Greek Gods imo!)
Doesn't feel like Spring in any way, shape or form although the local blackbirds are competing over a length of hedge, the rooks up the road are bringing sticks to their nests, and over in Strasbourg (where eldest is for a break) the White Storks are back and building up their tall nests again despite the sleet and cold rain!

The weather has curtailed much in the way of work in the allotment beyond making sure the pot lemon tree is protected, harvesting the last of the leeks and moving the swing frame down to the next section. Too cold for anything to go out yet though, but over the next week or so I want to get started with indoor seed planting. 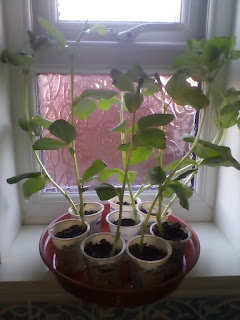 I really should have planted some broad beans in Autumn but in order for them to catch up I decided to get some started indoors.

They are now trying to escape! They are getting hardened off a bit in our downstairs loo as it gets quite cold in there overnight, but to put them out now with all this wind would just result in them blowing over I think, even though they are quite hardy.

In my opinion they are not that tasty dried and stored, and are I think best eaten when young and boiled straight out of their pods.

I have in the past had to use some organic certified spray to control blackfly on them, though companion planting - marigolds, nasturtiums or poppies also helps. 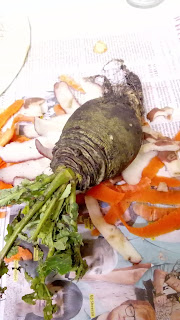 As we start thinking about the forthcoming season, there have been a few remaining vegetables from last year, either in store or in the allotment.

There's a few leeks - now for some reason I have never been able to grow really thick leeks but as there is only me that eats them most of the time this doesn't matter too much and one small leek per meal is enough.
Swede have never been a success on the allotment, maybe it is the soil, which is a shame as we eat quite a lot of it, but turnips do well though, strangely. That being said, this is the biggest swede we have had for a long time and it tasted good!
A couple of weeks ago I decided to stop harvesting parsnips as they grew woody (4 months of parsnips was good!) though the rest will stay in the ground so that next month sometime I will start off another batch of parsnip wine! We've eaten the last of the onions (7 months supply), garlic and apples (4 months supply) from store. There's still plenty of jam - we never run out! 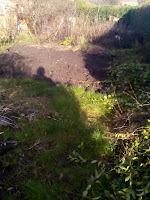 A general view of the allotment. Apart from the middle section and a number of other permanent beds and plants round the edges, the remainder is four rotational beds. Some people advocate no-dig permanent beds and there's been some interesting comparisons of the yields and benefits of both methods. However, I feel that exposing the top layers of soil to the elements for the frost to break up the clods and for the local robins, blackbirds and indeed both song and mistle thrushes to have a good search for slugs, snails and other grubs (and indeed worms - but there are plenty of them!) is also beneficial.
The bare section in the sunlight was where the potatoes were last year, these will move down beyond the permanent fruit bushes at the back of that bed, with peas and beans, some courgettes and pumpkins replacing them in 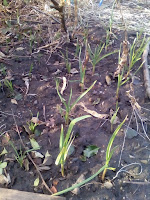 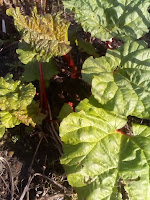 the second bed this year. Brassicas will move from the bed behind the fruit bushes to the final bed at the bottom of the allotment with onions, garlic, leeks, carrots and sweetcorn replacing the peas and beans in the bed to the left of the camera position. This latter bed is already planted with some overwintered onions and garlic, the onions will be ready around the start of July, maybe even late June.


The middle bed (of the 5 main beds) is a permanent bed with blackcurrants, raspberries, a minarette damson tree and a late ripening Gala apple tree.
There is also rhubarb which originally was a cutting off the root of one grown at my parents' house in the Yorkshire Rhubarb Triangle (the area south of Leeds which is famous for forced rhubarb grown in large sheds by candlelight). I do wonder whether to make some rhubarb jam again but it doesn't seem to keep very long for some reason.


We're going to grow more bee friendly flowers this year for the garden and allotment, although already in the allotment the bees and hoverflies enjoy marigolds, nasturtiums, all the fruit blossom, some lavender and poppies as well as dandelion flowers (though we do cull these every so often before they seed) We also leave a couple of leeks to go to seed and also grow sunflowers in summer.
But, we feel we can do more and the buddleia in the garden attracts butterflies and indeed there's been quite a few different moths over the years (Buff Ermine, Apple Moth, Silver Y among others)

Just hope the weather improves and it dries out a bit!
Posted by Michelle at 15:38