Broad beans and pruning back 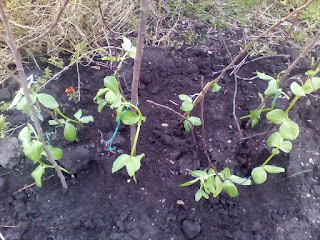 Better late than never! Have been able to plant some broad beans out in the allotment that I have started off indoors in order for them to catch up a bit!

Our seed planting takes several stages, firstly any seeds to be germinated start off in the warmest part of the house, next to the radiator in our bedroom! Then they will either go into the bathroom or into the downstairs loo to grow on a bit before being put into the lean to greenhouse to harden off prior to planting out.
Sounds complicated but it means that there's a succession of plants in different parts of the house at different stages of growing!

Over the past couple of days, with some time off work, we have been finishing off the pruning back - the holly in the garden has had a good cut back now it has finished producing berries for the birds. In winter it was quite funny to watch the blackbirds jumping up off a perch to reach the berries! The fuchsia has also had a third of the plant taken out in order to encourage regrowth and the ivy - as always - requires the secateurs! Also, the buddleia was cut back to about a metre above the ground, last year this was really good for butterflies as is its function!

In the allotment the hedge has been a work in progress in terms of trimming and today I used the Darlac cutter to get through some of the tough stems of brambles and of a hawthorn which is growing in the middle of the privet. The hazelnut got trimmed a few weeks ago, the tall whippy stems avoiding the ones with catkins on. The hawthorn in the garden has had a few branches lopped back to stop it from rubbing against the telephone wires.

All that cutting back has left us with lots of clippings - the hedge clippings seems to be doing a good job of rotting down in a pile at the allotment and the holly has been chopped into small pieces and added to the compost heap with some other garden pruning. The hazel, buddleia and hawthorn sticks will do really well as pea and bean sticks and supports for other plants in due course.
Posted by Michelle at 18:21